The physical aspects of Karate and Taiji promote fitness, health, well being, character and sportsmanship. The mental aspects of Karate and Taiji challenge the mind to focus on the core values of character, respect, discipline, honesty & integrity while building the attributes of team spirit, leadership and mentorship. Through dedicated practice, martial arts students can develop into valued members of society accountable for their own development, decisions and actions. The skills learned and polished in the training environment can be translated into life skill that can be implemented in the spheres of education, work and everyday life.

Sei Shin Kan School of Karate introduces the traditional Wado Ryu (Way of Peace) system of karate, directly from Japan. The Reading Taijiquan Academy offers the Chen Family original style of Taijiquan directly from Chenjiagou Village in China. The learning programmes includes fitness, self-defence, mental awareness, body awareness, confidence, self-control and self- discipline. The physical aspects of Karate and Taiji are critical, and the development of good character through karate practice is fundamental. Without attention to the mental aspect, Karate and Taiji practice is empty. These deeper values form the true spirit of genuine martial arts practice, in Japan this is called ‘Budo’.

Viki Lloyd has trained for over 30 years in the traditional Japanese martial art of Wado-Ryu Karate. She is a 4th Dan black belt, all her grading examinations have been conducted by Japanese instructors and her qualifications are recognised and registered in Japan.

She is a member of the Wado International Karate-Do Federation and the English Karate Federation. Viki has travelled to Japan for advanced karate training, spent time training in some of the leading Japanese karate dojos and is a former British and European Karate champion.

Viki is well known in the UK and across Europe as a senior student of the late legendary Grandmaster Tatsuo Suzuki 8th Dan Hanshi (1928 – 2011) who originally introduced the style of Wado Ryu to the UK in the early 1960’s. Viki continues to train regularly and seek advanced instruction in the UK with renowned karate instructor Sensei Kuniaki Sakagami 8th Dan. She has learned from and been advised by many of the leading Japanese and European karate instructors during her many years of training.

Viki has worked as a nursery assistant, in a residential unit for young people with severe learning difficulties and as a lecturer at the University of Reading. She has taught lessons in primary schools and secondary schools, spent eight years as a primary School Governor; eight years as Governor then Chair of Governors at a leading Early Years Centre in Reading. She is first aid and fire warden qualified. Has been CRB and DBS checked. Viki has attended Safeguarding Children Training, Disability Awareness Training and Equality Awareness Training with Reading Borough Council. Sei Shin Kan School of Karate is a member of Reading Children’s and Voluntary Youth Services. 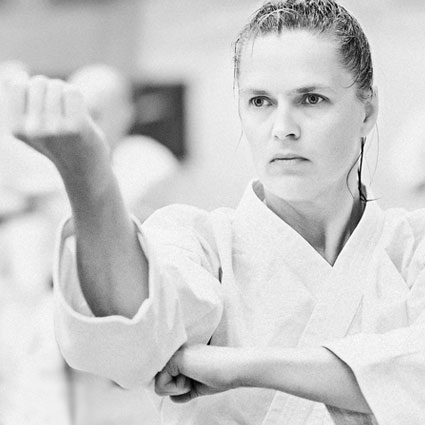 Pete Evans has been involved in martial arts training and practice for most of his life, learning judo as a youngster, then Taekwondo with Sensei Michael Miller in Didcot. When he moved to Reading he joined the Northern All Styles Sport Karate Club based in Carey Street and graded under Pat Scantlebury and Clayton Murraine, achieving a 2nd kyu brown belt and travelling the across the UK as a keen tournament competitor.

Pete is CRB and DBS checked, has been First Aid trained and Health and Safety trained. Married to a midwife, Pete has volunteered with Reading Scouts, helped at the Reading Half Marathon and volunteers at work in his lunch break to assist young children with their reading skills in an Inner London Primary School.

Away from martial arts, Pete is a skilled musician, playing guitar for a well known local blues band and a keen motorcyclist. He is the proud owner of a Harley Davidson. 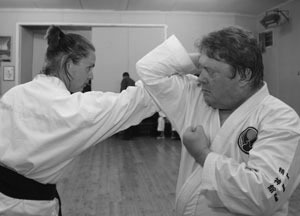 Dave’s introduction to the martial arts began in 1988 following a skiing accident that prevented him from long distance running which at the time was his favourite sport. His brother in law, who had just got his 1st Dan black belt in karate, suggested training at his dojo and try a bit of “light exercise” until his leg recovered. The rest as they say is history, there followed 30 years of training in Okinawan Goju Ryu karate eventually achieving a 3rd Dan grade. Dave have trained with various Okinawan, Japanese and English masters in particular with Sensei Higaonna 10th Dan, Sensei George Andrews 8th Dan and regularly with his brother in law Sensei Rick Mortlock who is now a 5th Dan.

When Dave reached the age of 60 he decided he needed to consider the possibility of a less strenuous form of martial art for the time when he could no longer do hundreds of push ups and sit ups. Dave had heard a lot about Taijiquan from a fellow karateka who trained in both styles and decided to give it a go.

Dave has been training Taijiquan now for over 12 years and in 2018 received the award of a 2nd Duan level by Master Chen Ziqiang. Dave has trained with many visiting Chinese masters notably Chen Xiaowang, Chen Ziqiang and Chen Yingjun, also with David Gaffney & Davidine Siaw-Voon Sim. In 2016 Dave spent 10 days training in Chen Village in China at the school of Grandmaster Chen Xiaoxing. He has trained with Viki Lloyd since she opened her school in Reading.

Prior to martial arts Dave spent 20 years teaching ballroom dancing and competing in Latin American dance competitions. He has been CRB and DBS checked and has been First Aid trained. 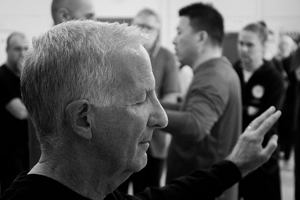 Karate classes are targeted at different age groups and ability levels and are goal based through the traditional grading examination system which takes students from white belt to black belt in a gradual staged progression of competence and skill. Children, young people and adults learn the fundamental training methods of Wado Ryu Karate through a study and practice of basic techniques, punches and kicks, kata (Form), partnerwork drills, and semi-contact kumite (fighting practice) and zazen meditation. The challenges in the dojo are reflected in the grading procedures which are demanding yet achievable and rewarding. This encourages the students to set and realise their own personal goals and achieve their full potential.

Taijiquan classes are targeted at different age groups and ability levels, are goal based and through the traditional syllabus which takes students from beginner to advanced in a gradual staged progression of competence and skill. Adults can choose to prepare for Duan Gradings under the Chinese Wushu organisation. Children and young people follow the traditional 'Chenjiagou Taijiquan School Training Syllabus' as taught and practiced in the oldest Taijiquan School in China.All students learn the fundamental training methods of Chen Taijiquan through a study and practice of basic foundation techniques, Empty Hand Forms, Weapons Forms, Partnerwork drills (including Push Hands), and Standing Meditation (Zhan Zhuang). The challenges in the dojo (training location) are reflected in the grading procedures which are demanding yet achievable and rewarding. This encourages the students to set and realise their own personal goals and achieve their full potential